date: Since 2016 place: World In progress 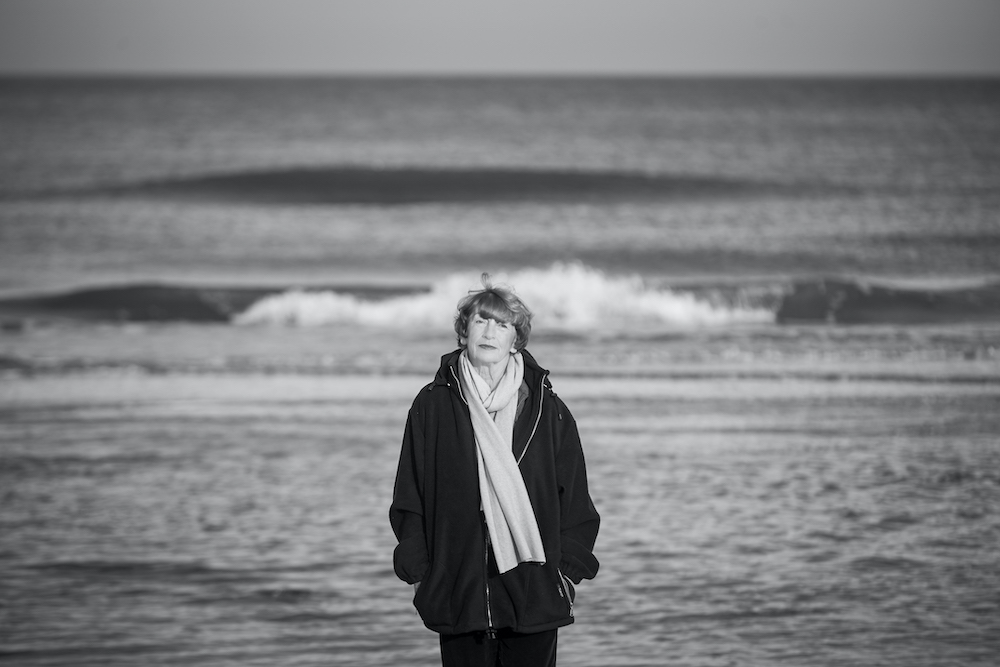 Born in Lwów, Poland (now Ukraine) on October 20, 1943, Elżbieta Sikora began her music education in Gdańsk and graduated from a State Music Lyceum before continuing at the Department of Sound Engineering of the Warsaw Music Academy under the legendary Polish recording engineer and pioneer in the field, Antoni Karużas. Already in the early 1960s the Sound Engineering Department at the Academy of Music applied an innovative approach of combining music and technology. After obtaining her degree in Warsaw, Sikora studied electroacoustic music with Pierre Schaeffer and François Bayle in Paris during the years 1968-1970.

Thereafter Elżbieta Sikora returned to the Warsaw Music Academy to study composition with Tadeusz Baird and Zbigniew Rudziński. Her 1971 composition, Widok z okna [View from a Window], created at the Polish Radio’s Experimental Studio led Sikora—together with Krzysztof Knittel and Wojciech Michniewski—to form the composer’s group “KEW” (the abbreviation representing the first letters of their names). A few years later, KEW presented at the 1974 Warszawska Jesień Festival Drugi poemat tajemny [The Second Secret Poem], widely recognized as Poland’s first multimedia work combining electroacoustic music with slide projections. Hailed as trailblazers in Central Europe, KEW was invited to perform at a number of concerts and festivals in Poland, Sweden, Austria and Germany. Sikora’s early achievements as an avant-garde composer were rewarded with scholarships from the City of Mannheim, Germany, and from the Kosciuszko Foundation in New York, which allowed her to study with John Chowning at the Center for Computer Research for Music and Acoustics of Stanford University. Following the world premiere of her composition Głowa Orfeusza [Orpheus’ Head] at the Warszawska Jesień Festival in 1981, Sikora was invited to join the Institut de Recherche et Coordination Acoustique/Musique (IRCAM) as a French government scholarship recipient, and afterwards she decided to permanently settle in France. At IRCAM she composed her first mixed work  Głowa Orfeusza II [Orpheus’ Head II] for flute and tape. In 1981-1982 she studied composition and music analysis with Betsy Jolas.

Between the years 1985 and 2008, Elżbieta Sikora taught electroacoustic music composition at the Conservatoire and the École européenne supérieure de l’image in Angoulême, Université Paris-Est Marne-la-Vallée and the composition at the University of Chicago. In addition to these assignments, Sikora conducted composition courses in Gdańsk, Munich, Hamburg and Ulm and was a Visiting Professor at the Chopin Music University in Warsaw. From 2011 to 2017 she was the Artistic Director of the Wrocław-based Musica Electronica Nova Festival. Since 1978 Elżbieta Sikora has been a member of the Polish Composers’ Union and in 1999 she received the degree of Doctor of Music from the Wrocław Music Academy.

Addressing her lifelong interest in electronic music, in a Polish Radio interview Elżbieta Sikora stated that,

I started composing electronic music in 1968, when it already had a long history and was in a full bloom. Since then, the technology has changed a lot. In 1981, I happened to be at the Institut de Recherche et Coordination Acoustique/Musique, where there were huge computers. In order to compose, you had to learn the program. For most musicians (and for me) it was a stage of “suspense” in anticipation of a friendlier technology. And it quickly appeared. Nowadays, composing electronic music is so easy that anyone can do it.

Besides electronic music, Sikora’s catalogue of compositions includes a number of chamber, orchestral and vocal works as well as operas. Her first opera, Ariadne (1977), was an artistic compromise of sorts since—according to the interviews given by the composer—the operatic genre “was not an attractive and adequate form of expression to engage the public.”  Undeterred in her quest to forge a new path in the operatic repertoire, Sikora’s next stage work, Derrière son double (1983), was a radio opera for voice, instrumental ensemble and electronic sounds. She continued with Wyrywacz serc [The Heart Extractor], a chamber opera to the libretto based on a novel by Boris Vian. Working on this project throughout the mid-1980s, Sikora revised it thoroughly in 1992. Directed by Mariusz Treliński, Wyrywacz serc was finally premiered in 1995 by the National Opera at Warsaw’s Grand Theatre, while the French, L’Arrache-coeur, version was first performed at Centre Pompidou in Paris in 1997. Sikora’s latest operatic project, Madame Curie, celebrated the International Year of Chemistry and the centenary of awarding Polish scientist Maria Skłodowska-Curie the Nobel Prize in Chemistry. This extensive work in three acts received its world premiere on November 15, 2011 at the UNESCO Hall in Paris. The Polish premiere of Madame Curie was given ten days later by the Baltic Opera in Gdańsk. A subsequent DVD recording was honored with the Académie du Disque Lyrique Award in France. Discussing the genesis of her latest opera, Elżbieta Sikora pointed out that,

[Marie Curie’s] life story is a truly operatic libretto, so we didn’t have to look far and invent a lot, and really nothing needed to be embellished; we only needed to appropriately interpret and present the facts of her life. That’s exactly what happened with this opera’s libretto. Of course we were not presenting Maria Curie’s biography, only highlighting a problem she herself might not have had. The question is whether everything we want to discover ends well, and whether discoveries bring good things into our life and contribute to the world’s progress, or whether they also have negative consequences. We all know that there are good and bad sides to everything, including scientic’s field discoveries. Marie Curie’s doubts are the main thread of this opera. […] I did not want Marie Curie to be a personality we know from textbooks—a scientist who worked day and night on her discoveries—but a human being who also walked this earth, who had her own intense emotional and intellectual life in all of its forms. I wanted to show her as a fully-living human being, and as a woman. This opera is basically a monodrama and Maria is always on stage. That’s how it’s notated in the score. Besides the comments from the choir and a few orchestral interludes, she must constantly sing something. That’s why, together with Marek Weiss, we looked… actually we didn’t look since both of us instantly knew who would sing that role. Anna Mikołajczyk was our first and only choice and I’m delighted that she premiered the title role.

Critics like Weronika Nowak, for example, have noted the appeal of Sikora’s vocal music,

In Sikoras’ operas, like in her songs, for instance Le Chant de Salomon (1992), the sound of the vocal parts is truly hypnotic. The variety of singing styles and vocal techniques, such as bel canto, melo-recitation, whisper or shout, are used by the composer as a tool for creating a wide range of moods, stretched somewhere between an introverted lyricism and an expansive drama.

In her review of Madame Curie, Chantal Cazaux also praised the sensuous qualities of Sikora’s music:

… Elzbieta Sikora’s score is sparkling, generous, [and] often percussive and brassy—perhaps in order to get close to the dangerous luminosity of radium. Its energy infuses the title role, never getting weighed down with useless pauses. It is colored with fine, lively touches, and often with deep, long and anguished sounds. The composer’s language, which mixes orchestra and electronic part, is expressive, rich and also poetic. Marie’s lament over the body of her dead husband, “Pierre, I want to tell you...” is a jewel of emotion and vocal grace. For Sikora’s vocal writing, though ample and emotive, is nonetheless coherent, combining the wild gesture with a pleasing melodious quality...

Sikora’s musical language seems to undergo constant search for perfection, a process she defined in an interview as follows, “I slowly began to abandon pure experimentation and decided to retain in my musical language only what was needed to express emotion or musical intensity.” The composer’s sensuous relationship to sound is often inspired by her travels across the world, where Sikora becomes a musical archeologist and chronicler of the environment, be it street noise in Lisbon or melting glaciers in Patagonia. Always recording and collecting sounds, Sikora later internalizes and refines them before utilizing them in her works. Summing up her career, Sikora averred that she keeps on composing “… because I don’t know how to do anything else … Composition is a constant search for something that does not have a real dimension … it’s a ceaseless task of trying to find the most perfect form for expressing in an abstract language of music something that burns with really fire deep within us.”

Throughout her life, Elżbieta Sikora’s work has been recognized with many prizes and awards including, among others, the 1978 Carl Maria von Weber Composers’ Competition in Dresden for Ariadna, , the 1982 Women Composers’ Competition in Mannheim for Guernica, two SACEM awards in 1994, and the 1996 French Association of Dramatic Authors and Composers Award for l’Arrache Coeur, the 2000 Competition of Electroacoustic Music (Magistere price) for Aquamarina. The recipient of the 2000 Heidelberger Künstlerinnenpreis, in 2002 Sikora received the Special Distinction of the Paris Jury de l'Académie du Disque Lyrique for Le Chant de Salomon and Eine Rose als Stütze, which were released on a Chant du Monde/Harmonia Mundi CD. In 2008 Elżbieta Sikora was proclaimed winner of the Sztorm Roku vote organized by the Gazeta Wyborcza daily, her Oliwa Concerto for organ and orchestra won in the classical music category. Together with Anna Mikołajczyk, Sikora received the 2012 Sztorm Roku Award for Madame Curie, an opera which also garnered the composer the 2012 Splendor Gedaniensis Award, Gryf-Pomeranian Arts Award, and the 2013 Polish Music Composers’ Union Award. The Government of Poland decorated Sikora with the Commander's Cross of the Order of Merit of the Republic in 1997 and in 2014  the Gloria Artis distinction. In 2004 she received the Chevalier de l’Ordre des Arts et des Lettres from the French Mini ster of Culture.