date: SINCE 2020 place: WORLD In progress 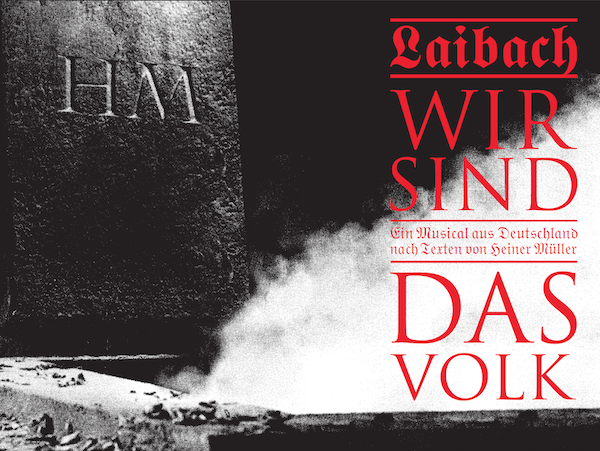 The latest performative-musical production of the legendary band Laibach, made in cooperation with German artistic circles.

“As soon as I hear the word ‘Volk’, I get wary,” said Heiner Müller in 1990. “It isn’t my ‘Volk,’ my people. I understood very well, especially in the fall of last year, why Brecht always insisted on saying ‘population’ instead of ‘people.’ A slogan like ‘We are one population,’ of course, does not work. It doesn’t have any spark at all.”

Today once again we must ask the question who or what was this choir that empowered itself with the slogan “We are the people.” In times of global regression, the phantasm “Volk” is solidifying again into ethnic, cultural or ideological homogeneity. The music theatre project “Wir sind das Volk – a Musical” harmonizes what has long belonged together: the poet Heiner Müller and the legendary band Laibach – featuring Agnes Mann, Susanne Sachsse, Cveto Kobal, Sašo Vollmaier and others.

“The dialogue with the dead cannot stop until they hand over the future that has been buried with them.” – Welcome to the abyss!

LAIBACH
Since its foundation in 1980, the collective Laibach Kunst (named after the German name of the Slovenian capital) has repeatedly (programmatically) dealt with German history, culture and ideology - especially with the prototypical expressions of fascist ideology and totalitarianism in the 20th century. In addition to overpaintings of European national anthems ("Volk", including the anti-hymn "Germania"), concept albums on Richard Wagner ("Volkswagner"), Johann Sebastian Bach ("Kunst der Fuge") or most recently Friedrich Nietzsche's "Zarathustra", their work refers to John Heartfield or conducts a musical dialogue with groups such as DAF, Kraftwerk and Rammstein. In the German theatre landscape, they arranged the stage music for directorial works by Wilfried Minks (1987), Sebastian Baumgarten (2011) or Milo Rau (2015). In 1993, the collective occupied the Volksbühne am Rosa-Luxemburg-Platz and founded the transnational art state NSK there, named after the interdisciplinary platform New Slovenian Art, founded in 1984. Laibach’s artistic approach to the retro-avant-garde, the symbolic appropriation of forms of expressions of totalitarian ideologies, follows Heiner Müller's "Dialogue with the Dead": The unresolved traumas of the past can only be overcome by confronting the conflicts that triggered them.

* Laibach's retrospective in the Turbine Hall in Tate Modern